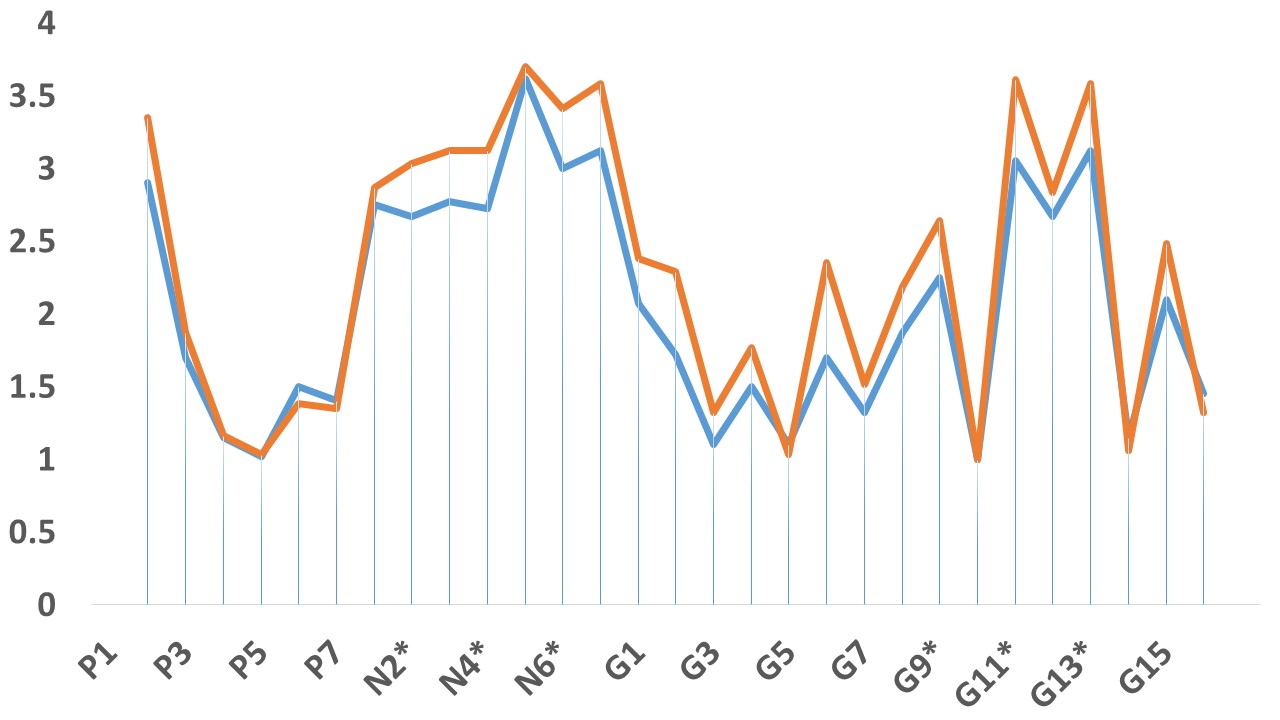 Objective.To evaluate the effectiveness of neurocognitive training in patients with paranoid schizophrenia.

Results. After 1st month, a statistically significant difference between the intervention and control groups was found both for the overall PANSS score improvement and improvement in several items, which represented the cognitive decline. Total PSP score increased significantly in the intervention group from 41-50 to 51-60 (р=0.0001). In Wisconsin Card Sorting Test the proportion of incorrect answers decreased by 31.4% (р=0.0001), perseverative errors by 20.1% (р=0.042), the number of completed categories increased by 33.5% (р=0.002).

Conclusion. The proposed neurocognitive training program showed positive results, which was reflected in a statistically significant improvement in PANSS score and cognitive tests performance in the intervention group compared to control group after treatment course and additional 5 months of the observation.

Due to the change in the concept of psychiatric services, which turned from stationery treatment to socially oriented care and integration of patients into society, the focus of schizophrenia treatment has also shifted from eliminating psychotic symptoms to “recovery” as a goal 1. Recovery involves the achievement of independent living, work and educational activities, satisfaction from interpersonal relations. In the 1990s, scientists’ efforts were aiming to find factors that prevented the successful social adaptation of this group of patients. In most studies, a stronger correlation was found between cognition and functional outcome than between psychotic symptoms and the latter 2. It was found that cognitive functioning is closely correlated with the everyday functional skills: social activities (shopping, use of telephone, transport and leisure time), work performance (work skills, level of autonomy, punctuality), interpersonal relationships (initiation, adoption, maintaining social contacts, effective communication) 3. Cognitive impairment (in working memory, attention, problem-solving behavior) is observed in 75-95% of patients with paranoid schizophrenia irrespective of the positive and negative symptoms severity 4. The researchers concluded that the neurocognitive deficiency is a core feature of schizophrenia. This statement is explained by the stability of the cognitive decline, its persistence, regardless of the disease’s phase and other schizophrenia symptoms. At the same time, the search for causes and mechanisms of neurocognitive disorders development was carried out, since the understanding of the neurobiological bases of cognitive symptoms in schizophrenia allows to develop specific pharmacotherapy agents that affect particular molecular targets, as well as to substantiate the influence of non-drug methods. Modern concepts of the origin of cognitive decline in schizophrenia formed the basis of the search for new specific pharmacotherapy agents. Three neurotransmitter systems, namely dopaminergic, glutamatergic and cholinergic, are at the center of attention. In addition to the invention of new drugs, it is relevant to note psychological interventions, including the training of cognitive functions in schizophrenia 3. The inclusion of cognitive training into the program of rehabilitation for patients with schizophrenia is based on the neuroplasticity hypothesis - a set of processes of synaptic connections remodeling aiming at neural networks optimization. Cognitive Remediation Therapy initially received the status of a program for rehabilitation in schizophrenia. It was believed that the improvement of basic cognitive functions favorably affects social intelligence, cognitive flexibility, problem-solving behavior. However, regarding this method, some scientists insist on the concept of “therapy” rather than rehabilitation. Thus, British professor T. Wikes in his work “Cognitive Remediation Therapy for Schizophrenia” justifies the concept of “treatment” as the influence of neurocognitive training on the symptoms of the disease 5. It should also be pointed that the issue on the possibility of personalizing measures aimed at cognitive recovery remains unresolved.

Objective. To evaluate the effectiveness of the differentiated program of neurocognitive training in patients with paranoid schizophrenia.

By the method of continuous sampling, after the informed consent was signed, a set of patients was recruited and assessed in accordance with inclusion and exclusion criteria. At the first stage of the study, we conducted a clinical examination of patients with schizophrenia to identify the disease’s psychopathological structure and patients’ socio-demographic characteristics. For this purpose, we used a structured interview method with the specially designed inspection card for the studied sample.

At the second stage, all patients were evaluated with the Positive and Negative Syndrome Scale (PANSS), Personal and Social Performance Scale (PSP), and several neuropsychological techniques (Trail Making Test Part A and B, Wisconsin Card Sorting Test, Luria test). These diagnostic tools were aimed at identifying the features of cognitive functioning in order to further utilize these data for developing a differentiated set of neurocognitive rehabilitation measures for this group of patients.

At the third stage, after analysis of the obtained clinical data, a differentiated program of neurocognitive recovery for patients with paranoid schizophrenia was developed taking into account the profile of cognitive functioning. A differentiated approach in selecting the main tasks of neurocognitive improvement was determined by the most affected domain of cognitive functioning with the involvement of the most preserved cognitive functions. For improving cognitive functions, we used the “Camertone” software (O.A. Skugarevsky, V.G. Obyedkov, A.P. Gelda, M.M. Skugarevskaya, V.V. Kot, Belarusian State Medical University, Republican Research and Practice Center for Mental Health; registration number 124-1109), which had been developed for patients with severe mental pathology and maximally adapted to this group of patients. 40-minute training was conducted three times a week during one month.

All the subjects were randomly assigned into two groups. The participants from the intervention group (n=40) received standard supportive medication treatment and were involved in the proposed differentiated recovery training aiming at improving neurocognitive functioning. The control group (n=31) received only drug treatment.

Assessment with PANSS and PSP scales was performed at the baseline period, first and 6th month after treatment initiation.

As a result of the treatment, both groups showed positive changes, but the improvement of negative symptoms, neurocognitive and social functioning was more pronounced among patients from the intervention group.

The total PANSS score after one month of observation was 62.05 (SD 9.16) in the intervention group and 69.03 (SD 8.97) in the control group. Figure 1 shows a comparison of PANSS scores in the intervention and control groups at this time period, after cognitive training. The study demonstrated the significant intergroup differences in improvement of the P2 (conceptual disorganization of thinking), N2 - N4, G2, G6, G8 - G11, G13 and G15 item on PANSS scale. The most pronounced changes were noted for the P2 (conceptual disorganization of thinking), N7 (stereotyped thinking), and G11 (attention impairment); in intervention group the score on these items improved by 20.27%, 17.24%, and 19.09% more than in control group. After six months of observation, the difference between the groups on the PANSS scale remained significant.

After one month the total score on PSP scale increased significantly in the intervention group and changed from 41-50 to 51-60 (p=0.0001, Figure 2). The score between 41-50 indicates marked difficulties in 2 or more areas of functioning and 51-60 only in 1 area (socially useful activities, including work and education; personal and social relationships; self-care). Thus, in patients from intervention group, the difficulties in at least one of the a-c domains became less pronounced. The total PSP score in the intervention group after one month had dropped by 14.88%, while in the control group - by 1.38% compared to baseline. The most marked changes were observed in the area of personal and social relationships as well as in self-care (15.52% and 15.22% respectively).

Neurocognitive tests performance in the intervention group increased significantly in all domains of cognitive functioning after neurocognitive training. The percentage of total errors decreased by 31.4% (p = 0.0001), perseverative errors by 20.1% (p = 0.042), and the number of categories completed increased by 33.5% (p = 0.002), which indicates an improvement in the working memory capacity. Some positive dynamics was also observed while carrying out the Trial Making Test Part A and B, namely a decrease in the test performance time by 26.3% (p = 0.017) and 9.9% (p = 0.008) in the main and control group respectively, indicating an improvement in attention and working memory capacity. After 6 months of observation, the improvements remained stable. At the same time, there was an increase in the number of patients from the intervention group, who successfully completed Trial Making Test B and Wisconsin Card Sorting Test (Figure 3).

The author declares that no competing interests exist.